One of the most powerful legislative reform movements in U.S. history, RISE—an organization dedicated to advancing the rights of sexual assault survivors—has passed over forty laws to date, including the Sexual Assault Survivors’ Rights Act, which was the 21st bill to pass unanimously through Congress in modern U.S. history. At a time when women’s most basic rights are under attack, how has RISE so successfully fought back? For this installment of our Reflections series, we interview Flannery Houston, Director of Programs at RISE. We explore how advocates like Flannery traverse the shifting terrain of sexual harassment and misconduct in the United States to bring about meaningful legislative and policy change in the interests of sexual assault survivors.

Q: Can you explain your role and what an average day looks like?

My job title with RISE is Director of Programs, which straddles a couple of different roles. My main role is heading up our state-by-state organizing work. I train our on-the-ground volunteers and help them through the legislative session, where their work is specifically to pass the Sexual Assault Survivors’ Bill of Rights on the state level. I also help with fund development and work on special projects. This includes our Survivor Fashion Show, which was held at MoMA during New York Fashion Week last September. An average day varies based on the time of year, but right now we’re in legislative session, which typically entails working with our volunteers to talk with bill sponsors, helping prepare testimony for committee hearings and contacting legislators to request their support ahead of a vote.

Q: What are the key challenges or rewards of the work that you do?

One of the biggest challenges is state governments. They move very slowly, which unfortunately delays progress. It can be really frustrating to work really hard on legislation, see it introduced, see it get through a certain number of milestones throughout the legislative session, and then die because no action was taken before one of the key deadlines. I would say on the flip side of that, the biggest rewards are simply getting survivors their rights and then witnessing the joy and accomplishment that our volunteers experience, not only from passing a law but from meeting those key milestones. We do our best to really celebrate every single milestone because even if you don’t get your bill completely passed in one session, the fact that you just made it through committee is a huge step, and so many people don’t get that far. So, it’s really important to celebrate the little wins as well.

Q: You helped to write and pass the Sexual Assault Survivors’ Bill of Rights. What have you learned from that process that stays with you in your day-to-day work now?

We keep a playbook of lessons learned throughout our work. Each state has their own ecosystem of how they work and how their legislative session plays out. So, our playbook is constantly being updated. This playbook has helped us create our Rise Justice Labs program, which is an accelerator for organizers, teaching everyday people how to pass their first law.

Q: The visibility of survivors has shifted and been elevated with the resurgence of “Me Too” as a movement. How has that public visibility shifted cultural understandings of sexual assault?

I think it’s been really positive. There’s an empathy that exists now that wasn’t necessarily there before. We see that in a lot of different places. We see that through the media and by talking with legislators. In general, it’s made our work more accessible to a general audience. That includes legislators who previously may not have had an understanding of what trauma from sexual violence actually looks like and what survivors are going through. So, I would say it’s been really positive.

Q: How would you describe RISE’s relationship to the media? How do you interact with media outlets? And are they a helpful tool for you in mobilizing change?

Overall, we’ve had a really positive experience with the media. However, some journalists tend to focus on the details of an assault which can lead to re-traumatization and even “violence voyeurism.” So always focusing on empathy towards survivors who are willing to speak out about their trauma is really important in helping to ensure that survivors feel heard and protected in the media. The mainstream media can be really useful in a lot of ways, particularly to get through legislative log jams. For example, we saw legislators in Wisconsin in 2021 use their platform to pen an op-ed calling for the passage of survivors’ rights. Lo and behold, a few weeks later, two bills supporting survivors were passed and signed into law. We see time and again that the media can be used to get things progressing in the right direction.

Q: You’ve said that the media offer another system of accountability for legislators. In thinking about accountability, how can we hold perpetrators accountable while also advocating for a more transformative system of justice? What does justice look like in the ways that you’re thinking about it, and how could legislation really center victims and survivors?

That’s a tough one. I think accountability looks different to every survivor, and justice looks different to every survivor. At RISE, we’re not necessarily focused on the work to hold perpetrators accountable. For us, what justice looks like is ensuring that survivors and their rights are protected in every state. Our model is that justice should not depend on geography: survivors, no matter where they live, or where their attack took place, should have the same rights.

Q: One of the biggest lessons from the research we’ve done is how important policy and legislation are to enacting change because cultural shifts are glacial. We need structures of accountability, both as guidelines, but also as evidence of something actively working towards justice. We’re optimistic, but also realistic in terms of what accountability looks like in those spaces. Are there bills coming up at the state level that you’re particularly excited about, or are there reasons to be optimistic in this current Biden-Harris administration?

I believe there are reasons to be optimistic regardless of the administration. We believe at RISE that hope is a renewable resource. A lot of what we do is about making sure that hope is passed on across the state level. Most recently, we helped to advocate for a bill in Louisiana that was just signed into law in June. We’ve tried hard for several sessions now to see movement in Louisiana, so it’s exciting to see this bill finally signed into law. We consider this a foot in the door so we can come back, having built strong relationships, to hopefully get more rights passed in Louisiana next year.

We’ve started to make great relationships with potential sponsors, with legislators, with on-the-ground organizers and coalitions on the state level as we move into 2023. Then on the federal level, we’re excited to be working with Senator Grassley’s office. He is a huge champion for survivors’ rights, and he has authored and introduced the Survivors’ Bill of Rights in the States Act.

Q: The idea of hope as a driver of your programming is really exciting. How does this connect to the role of survivors in your work? You mentioned that you work closely with volunteers, and presumably many are themselves survivors. When you are doing this legislative work with senators, how do you center survivors?

It’s difficult to come across an individual whose life has not been touched by sexual violence in one way or another, whether they are a survivor themselves or a family member or a friend. It’s unfortunately so pervasive. So yes, we work with a lot of survivors and a lot of allies. We are a survivor-led organization so centering survivors comes from the top down in all our programming. We’ve also instituted an organization-wide collective disconnect. This is a week that happens a few times throughout the year where all “risers,” whether they are volunteers or lead staff, take time off at the same time and the office completely shuts down. This is a way to avoid activism burnout and it is another way to center survivors in our work.

Q: Media coverage of the recent Johnny Depp and Amber Heard defamation case has been described by many advocates as a sign of backlash or even the “death” of the MeToo movement. Since the trial was live streamed, the jury wasn’t sequestered, and much media coverage of Heard was deeply misogynistic and victim blaming.What do you think this case tells us about potentially shifting attitudes towards survivors?

Q: We’d love to end today by thinking about how you care for yourself in your work. You mentioned that RISE implements collective breaks, which is a wonderful top-down structure of care. How do you implement your own self care practices, both in your philosophy of making change and in your own health and care?

That’s a great question. The collective disconnect is a really big thing. We also have a trauma-informed guideline that we paid close attention to at the start of the pandemic. Personally, I come from a background in the arts. I was a professional modern dancer for 13 years before diving into this work, so I take time for myself to dance, to do yoga, to paint. A big thing we emphasize with our volunteers is simply journaling. If you are coming across a tough moment, journaling is a great way to get it out there for yourself. We also make sure that there are a lot of windows of opportunity for folks to take care of their mental health and make sure that they’re taking time to really express their love for themselves.

Perry B. Johnson (she/her) is a Postdoctoral Fellow at the Annenberg School for Communication’s Center for Media at Risk and the Annenberg Center for Collaborative Communication. She studies power in popular music, particularly as it relates to sexual misconduct. Follow her on Twitter @PerryBJohnson

Sophie Maddocks (she/her) is a doctoral student at the Annenberg School for Communication and a steering committee member of the Center for Media at Risk. Her research explores individual, organizational and legislative responses to image-based sexual abuse. Follow her on Twitter @Sophie_J_J 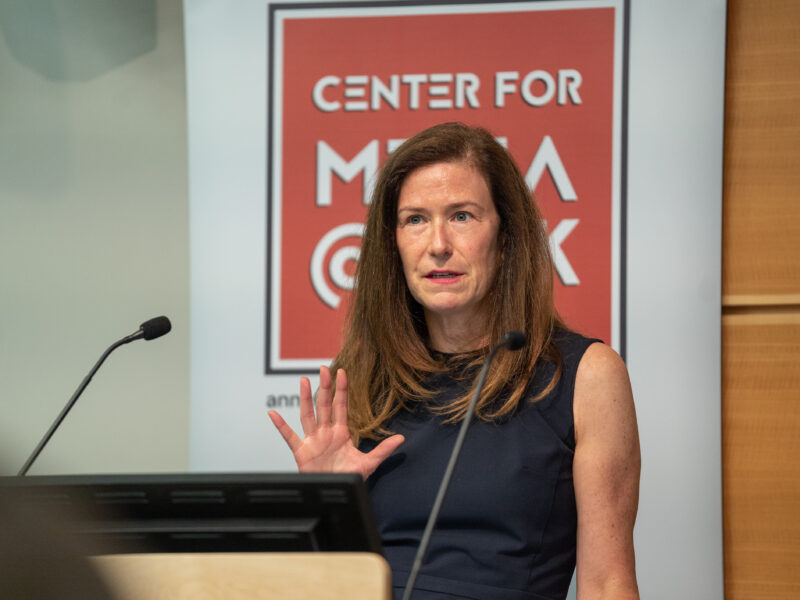