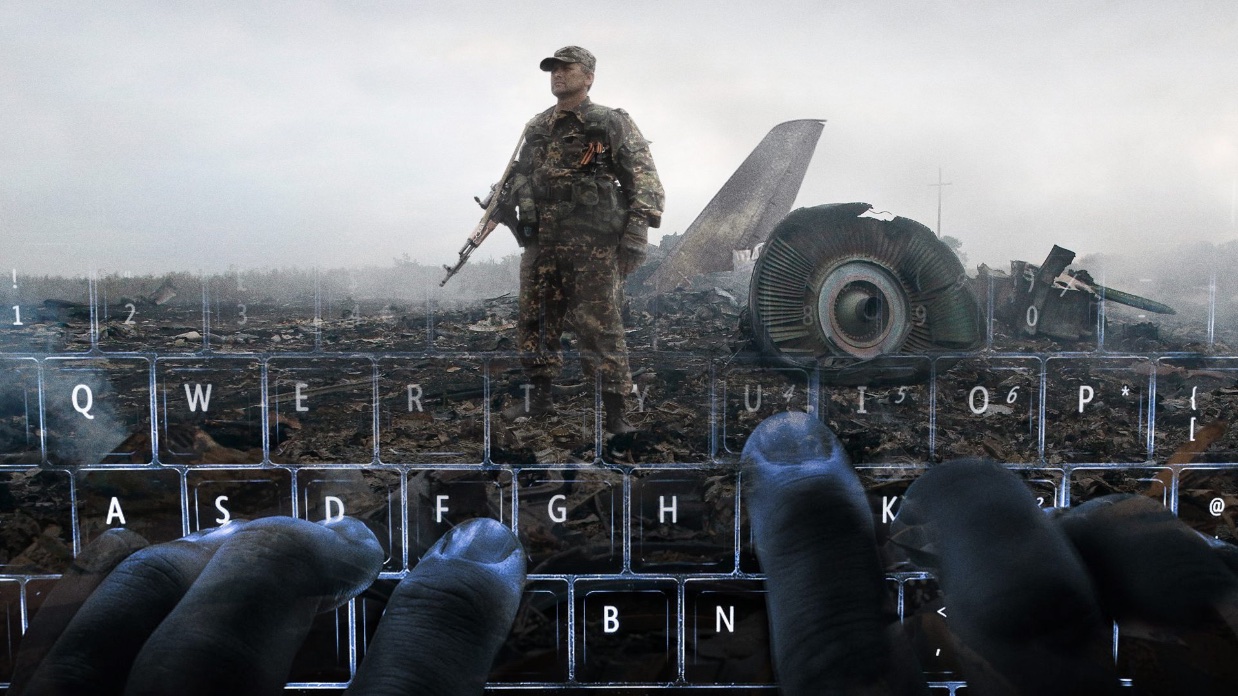 Posted at 12:08h in Documentary, News & Updates by The Center

What is truth? How is truth determined, verified and defended? What are the methods employed to ascertain truth in an increasingly post-truth society? Indeed, what are the risks for citizens and journalists in producing truth in a world where misinformation, disinformation and outright lies have become hallmarks of powerful governments and media outlets? In “Bellingcat: Truth in a Post Truth World,” Hans Pool, an award-winning Dutch director and cinematographer, takes us on a thrilling and, as one might expect from a documentary, revealing journey to find answers to these questions.

Moving far beyond the edict truth, plain and simple, the film excavates the systematic and multifaceted approach necessary to work against disinformation. Whereas “plain and simple” signals a discovery of truth with ease, Bellingcat, as lucidly revealed in the film, arduously disentombs truth from the graveyards of disinformation and misinformation. It is this focus on method—the research process—that is most compelling in the film.

The documentary follows a group of citizen journalist or, more aptly, dexterous researchers whose primary and ethical aim is justice and accountability. The documentary takes its name from the group, Bellingcat, which was founded by Elliot Higgins (English). The team featured in the documentary—including Aric Toler (American), Christiaan Triebert (Dutch), Veli-Pekka Kivimaki (Finnish), Hadi Al-Khatib (Syrian), Timmi Allen (Germany)—bring an extraordinary, even dizzying array of expertise and fastidiousness to finding the truth. Not only do Bellingcat members volunteer their time, but they do so without institutional support even as they risk a great deal in the quest for justice and holding the powerful accountable for their blatant dissemination of misinformation and disinformation. This is to say nothing of the fact that most of the members do not have security or protection. They are truly, quite literally, risking their lives to find facts, evidence and ultimately the truth to major events that have taken place. As Timmi states in the film, “we want to know what events have taken place.”

On August 12, 2017, Charlottesville, Virginia would become another site for anti-Black violence and death. White supremacists along with other far-right activists and supporters of the confederacy were gathered at the “Unite the Right” rally to protest the removal of Robert E. Lee from Emancipation Park, which is located in City Center. As is always the case, these rallies are marked with violence, not least because of the history of the confederacy and its relationship to anti-Blackness. Just two years before this, June 2015, Dylann Roof, a white supremacist and confederacy adherent, entered Bible study at Emanuel African Methodist Episcopal Church in Charleston, South Carolina and killed nine Black parishioners, shooting them in cold blood. The rally in Charlottesville would turn deadly when a neo-Nazi from Ohio drove his car into a group of counter-protestors, killing Heather Heyer and injuring 28 others. Weeks after this attack in Charlottesville, photographs and videos that captured more violence from that day would emerge, in particular the violent beating of Deandre Harris, a Black American.

This immediately captured the attention of Bellingcat, especially Aric Toler. Bellingcat went searching through social media profiles and public videos in order to identify the names and any other information about the racist attackers in the photographs and videos. The focus was on “user-generated videos, including those from live-streamers, participants, activists and semi-amateur news distributors (such as Unicorn Riot).” They purposefully avoided video material from large news organizations (such as BBC and Voice of America). Aric, along with other members of Bellingcat, rationalized that videos from major news outlets are “unlikely to be lost, while user-generated content can be easily deleted and disappear from the internet forever.” Going a step further, they saved the metadata from videos just in case they were deleted. Their goal here was to erect a visual archive of violence—finding and cataloging are hallmarks of the archive—because they believe it is “vital for understanding how the events of August 12 in Charlottesville transpired.” Additionally, they want to preserve this archive as possible evidence “showing criminal actions.” It is important to note that Bellingcat has worked with Syrian Archive (founded by Bellingcat member Hadi Al-Khatib) as well in order to preserve footage of war crimes in the Syrian Civil War. On August 25, Dan Borden, one of the men in the photograph violently beating Deandre was arrested. While Bellingcat stands clear of taking credit for this, they do concede that the arrest was likely due to the online efforts to identify the attackers.

It is this striking “open source” method that is utterly gripping about Bellingcat. It is not, however, without its critics and controversy, to which I return at the end. In another case considered by Bellingcat, one arguably more political and riskier, they investigated the downing of Malaysian Airlines Flight 17 (MH17). As a viewer, this is the part of documentary that makes you think you are watching a spy thriller, where all of the skills of each member coalesced to not only dismantle the disinformation and refract the misinformation by the Russian government that sought to deny their involvement, but to ultimately conclude that the Buk missile launcher responsible for the downing MH17 belonged to Russia. Drawing on various sources—such as Google Earth images, the expertise of Veli-Pekka Kivimaki, a military expert, 3-D renderings by Timmi Allen, a visual artist, and social media profiles of the wives and girlfriends of suspected Russian military personnel—Bellingcat was able to identify the individuals linked to the downing of MH17 and the specific brigade that the missile launcher came from—the 53rd Anti-Aircraft Missile Brigade.

From open source data, meaning material that is available to the public, the team was able to identify the truck that hauled the launcher. To verify this information, they looked at other vehicles in the convoy across several images and time of day through Google Earth as well as a video that was taken on the day of the MH17 downing. The team was even able to identify the missiles (four to be exact) alongside the Buk on the truck that was used to down MH17. Looking at video footage of the truck the morning after the missile launch, Bellingcat observed that one of the four missiles was now missing. To further verify where the video was taken, they analyzed seemingly useless details that appeared at the end of the video: fuel prices and shadows. They looked at data about the fuel prices on the day of the MH17 shootdown and compared them to those shown in the video. They also highlighted a shadow that was cast by the truck carrying the Buk. This, alongside a satellite image on Google Earth of the gas station passed by the truck hauling the Buk, confirmed when the video was taken.

On June 19 2019, the international Joint Investigation Team (JIT) revealed that arrest warrants were issued against four members responsible for the downing of MH17, the same four (along with others) that the Bellingcat Investigation Team had revealed in their 88-page report, which was released several hours before JIT’s conclusions.

It is important to mark here the amount of time and acuity necessary to unearth this type of evidence. As remarked in the film, an average journalist just does not have the time to do this type of research. In fact, in an interview with Lauren Wissot of Filmmaker Magazine, Hans Pool remarks that it was this research that lead him to do the documentary. Pool states, “It all started with an interview with a member of Bellingcat in a Dutch newspaper. He had researched the exact location of the [Buk] that was in the background of an image of a rocket launcher and figured out that it was one that had shot down the MH17…” He goes on to say, “he was just an ordinary guy with a family, and he did all of this from his ‘man cave.’ It was fascinating to see the open source internet being utilized like this. I thought this is someone doing something really important.” This is to say nothing of how incredibly transparent Bellingcat is with their methods and data. Although I agree that the use of open source is fascinating, what Bellingcat the organization and the documentary reminds us of is that the methods which we deploy to get at the truth not only matter but must, at times, take unconventional detours around established channels of investigative journalism.

It is no wonder, then, that some media outlets have simply labeled them “armchair researchers” who sit on cozy couches scraping social media posts. As Claire Wardle notes in the documentary, it is in people’s interest to argue that Bellingcat is not trustworthy because of the work they have done in providing the truth, especially because they have shown that they are capable of revealing information that most do not want publicized.  Following the views of New York University Professor Jay Rosen, members of Bellingcat are not “accidental journalists,” but are incredibly important to the “category of the public” and what it means to engage critically in a world where truth seems to always be under erasure. As the documentary highlights, the Bellingcat team has investigated a number of cases, such as the Skripal poisoning of Sergey and Yulia Skripal and the killing of British citizen Dawn Sturgess.

If, indeed, we are attempting to answer the questions of what really happened, what is the truth and how was it determined, then Bellingcat issues a clarion call that we not only innovate our methods but abandon those that just simply and plainly no longer work. Perhaps such methods have been compromised, dare I say, laid to rest by the societal forces of disinformation and misinformation.

LaCharles Ward is an educator, writer and interdisciplinary scholar of black visual and cultural studies. He received his Ph.D. from the Rhetoric and Public Culture Program in the School of Communication at Northwestern University, where he also had a graduate affiliation in the Department of African American Studies. His research spans the areas of black visual culture as theory and method, black feminist theory, history and theories of photography, race and technology, materiality of death and black protest cultures. His scholarship is driven by a refusal to allow the State and other death producing entities to have the last word on Black life.   Find him on Twitter @LaCharles88