During a relaxed and carefree Saturday afternoon walk around my new neighborhood in West Philadelphia, I was jolted to attention by a black Mercedes SUV speeding down the boulevard. The car’s passengers, a group of young Brown men dressed in suits, were blasting the Drake song “Started from the Bottom” and singing loudly along with the lyrics. I presumed that these young men—all Penn students—were celebrating an occasion like a birthday or a milestone achievement and while they were speeding and exhibiting a sense of bro-pride, it wasn’t quite reminiscent of toxic fraternity male behavior. It was joyful, and it was their shared joy which stopped me in my tracks.

Immediately after this moment, I thought about a film I watched as part of the 2021 Double Exposure Film Festival. Accepted, directed by Dan Chen, is a layered story about predominately Black and low-income high school students in rural Louisiana where, like many underserved communities, college acceptance is positioned as the ultimate ticket out. As I walk Philadelphia’s university city district that stretches across the University of Pennsylvania and Drexel University campuses—two very different worlds in the same part of west Philadelphia that some would say offer two different reflections of America—I think about how the trust put into these institutions causes students and their families, like the ones at Louisiana’s T.M. Landry, to take extreme measures to get accepted.

As a media scholar and filmmaker, I seek to analyze and position everyday representations of Black joy as critical practice and believe it is important to center joyful representations as narrative data for learning about and from Black life, looking beyond the experiences of trauma and oppression that dominate media and academic outlets. Before seeing this film, I had never heard of T.M. Landry College Preparatory, or the scandals that befell it, but I instantly identified with the viral videos of students who attended the school being accepted into Ivy League and other elite universities around the country, because they were so familiar to my own experience and those of many of my peers for whom college acceptance to a predominantly white institutions (pwi) are often a tedious milestone.

These videos, which were shared widely on social media, are elemental to the T.M. Landry story. They feature mostly Black high school students sitting at a laptop surrounded by their entire village, opening what I perceived to be emails from their top choice schools to learn whether they had been accepted. The film gives a poignant overview of the high stakes for many T.M. Landry students and their families, who, like so many working-class households in the US, view higher education as the best chance for life-changing upward mobility. The accepted students are often supported by family members who did not get the chance to go to college. We see how parents sacrifice everything, including life savings and endless time commitments, to send their gifted child to an elite university.

Just minutes after you’re smiling at the heartwarming successes of T.M. Landry, the film takes a drastic turn, like the drop of a rollercoaster that your stomach anticipates before getting on board. While there is much to say about this turn, one question stayed with me long after: what drives a Black male teacher and coach from a rural Southern underprivileged background to feel that the only way to get intelligent Black students into Ivy League institutions is to create what one student described as “a cultish mentality”?

There are many reasons to take issue with the school’s founder, Michael Landry, and the film, through student accounts, lays them out clearly. There is also the brief but timely overview of an even more well-funded and thought-out college admissions scandal that was unearthed around the same time as T.M. Landry’s viral coverage: Operation Varsity Blues. Considering all of this, Accepted challenges those of us in higher education to recognize that Landry is not the only villain in this film.

Collegiate institutions are not innocent players in either of these scandals, and it is clear that media coverage placing blame solely on Michael Landry deflects from the bigger beast. The film reveals how reporting on the T.M. Landry case portrayed Michael Landry and his wife as gaming the system when, in fact, Michael was a pawn in much larger rigged game that has been going on long before his school was established.

This film is not just an exposé of college admissions in the United States; nor is it only an inside look at the real experiences of some gifted students from rural/underserved communities who give their all and more to get their shot at acceptance to a prestigious university. Accepted tells a nuanced story about the complexity of excellence programs designed to help underserved students be seen in a system that often renders them invisible. Higher education has been grappling with issues regarding merit and establishing a difference between widely used terms such as equality or equity and inclusion or assimilation through much of its efforts to diversify predominately white institutions (PWI’s) in the admissions process. I saw this film as a loud and clear critique of the ways that white saviorism creates deeper toxicity for Black and Brown prospective students.

The film complicates terms like “at-risk youth” when it is revealed that Landry was [allegedly] instructed by white university deans to “dramatize” students’ trauma to better appeal to the white liberality of admissions counsellors looking to satisfy the university savior narratives and fulfil diversity quotas. The term “underserved communities” and the assumptions made about students who live in them are interrogated in this film during the scenes of how the media covered Landry’s success and wrongdoings. It was as if the students at the school, who arguably did do the work to get into elite universities, were constantly undervalued by a lack of acknowledgement that they were gifted, intelligent and highly motivated before they entered T.M. Landry.

This devaluation speaks to a larger issue in the higher education system and many of the programs and initiatives promising collegiate success to “at-risk” high school students. Students are first undervalued by being deemed worthy only due to their attendance at a prep school with unprecedented college acceptance to “top schools,” which later discredits their innate gifts and achievements when its cult-like leader is indicted. Second, many of the Black and Brown students from T. M. Landry face a future of being undervalued by the schools they attend, because many high-achieving Black and Brown students arrive on campus where they are treated as marketing materials for D&I campaigns.

The case of T. M. Landry demonstrates how many Black and Brown students are rarely acknowledged for their own talents, but only by affiliation with or for the advantage of the institution. These nuances are important because elite universities and their supporters often claim a false narrative that they gave “poor students” from rural or “underserved” parts of America a chance when no one else would. I believe that this line of thought diverts the national conversation about college access for underprivileged students away from holding college admissions departments accountable for doing better to fix the decades of inequity that have allowed elite institutions to continue to thrive based on who they keep out and not who they let in, an idea further unpacked in the 2015 book America’s Unmet Promise by Keith Witham and his colleagues.

Furthermore, the narrative of elite universities “letting in” students from often overlooked communities creates an unspoken expectation that we should be grateful just to be “in.” This pressure can alter one’s ability to fully comprehend how much they are being pushed to assimilate and code-switch at predominantly white institutions in order to feel a sense of belonging at the school.

The students featured in this film demonstrate that there are many more challenges and hurdles in the college admission and attendance process than we see covered in the general diversity and inclusion efforts of today. I want to lay out several points from the film about exploitation and the extreme measures students take for college admission when their zip code places them at a disadvantage. I hope that these observations can initiate deeper conversation in classrooms and boardrooms across higher education and among the media makers telling these stories.

Outside of Michael Landry’s crimes, what Accepted makes clear is the ‘exploit or be exploited’ environment that much of higher education is built on and the experience of this for those typically called ‘at-risk youth.’ There are two critical texts that should be reviewed as part of watching this film, and those are Doron Taussig’s book What We Mean by the American Dream and Beverly Daniel Tatum’s book, Why Are All the Black Kids Sitting Together in the Cafeteria?: And Other Conversations about Race.” The T.M. Landry Prep School is a shining example of the rarely acknowledged other side of the transformative experience of college acceptance for underprivileged youth, but as noted earlier it’s also a call to reflect on the harms done to underprivileged youth by all institutions. It begs the question of what extremes some of us have to go to, including breaking the law and subjecting ourselves to harsh treatment by teachers we believe are playing dirty, to have a chance at acceptance [to elite schools]. I ask this because while I think Accepted is a nuanced and complicated story, the student voices centered in this film tell us a lot about what is not working in our education system at large, and yet still so many of them and their families risk everything to get into these spaces.

As someone who comes from the kind of background represented in this film—Black, raised low income, first-generation college and graduate student who attended decently ranked schools, persisted all the way through PhD mainly on scholarship and now works at an Ivy League institution—I am still trying to figure out what standardized testing, the scholarship galas that place Black/minoritized low income students on display in front of old white donors, and now kneeling on rice for several minutes (according to a New York Times article about T.M. Landry academy practices) have to do with getting accepted into elite universities. A broad suggestion of this film seems to be that higher education as an industry, with all of its reckonings with race and inequity, still has a hard time separating itself from the exploitation of low income, Black and other vulnerable youth for the sake of us getting Accepted. Unpacking that suggestion and the action steps it takes to divert resources and efforts towards sustaining these changes in practice not just on printed pamphlets to lure Black and Brown students into what can be violent university environments, should be the focus of a film yet to be made.

Chaz Antoine Barracks, Ph.D., (Media, Art, Text, Virginia Commonwealth Uni) is a Blackademic, artist-scholar, podcaster, filmmaker and postdoctoral fellow at the Center for Media at Risk. His scholarly practice is grounded in interdisciplinary studies that pull together performance research, Black Studies, rhetoric and communications, film and digital humanities. After completing his doctorate in 2020, he wrote and directed the Everyday Black Matter film project, which launched from his emerging media hustle Black Matter Productions, LLC. Chaz hosts the Black Matter podcast, which is a social platform for and by Black/PoC queers and femmes that serves as a curatorial space for museum exhibitions, live performance and archiving of alternative forms of making and producing knowledge. Find Chaz on Twitter @ChZ_PhD 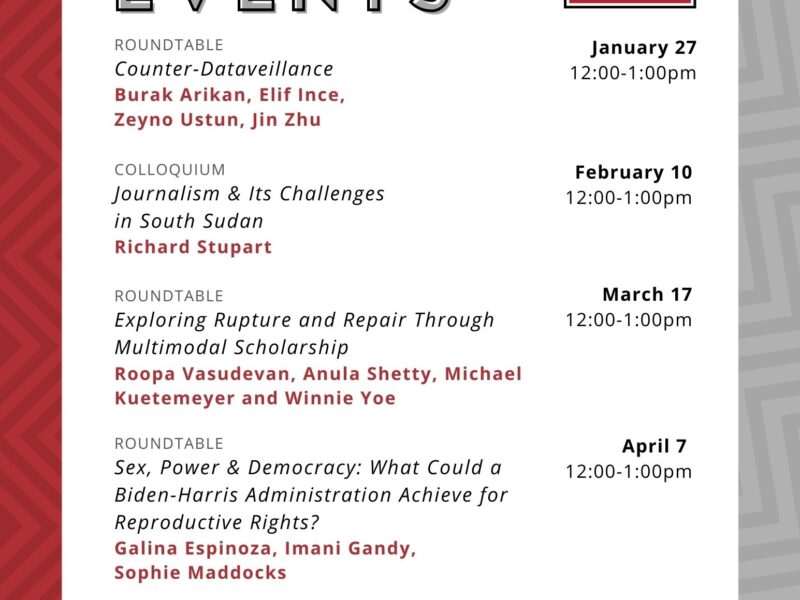 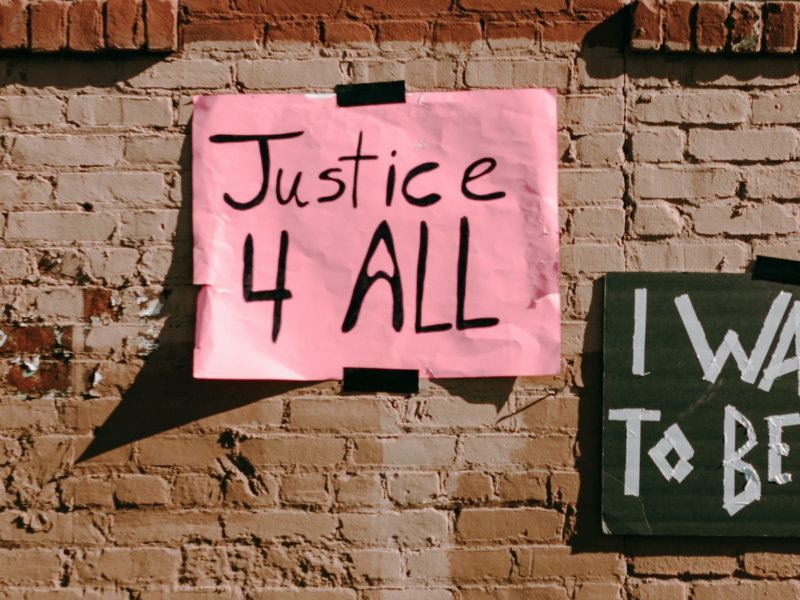